Activity has almost moved back to pre-pandemic levels in Q1.

The evidence is not yet decisive, but it seems that the activity is losing momentum.

The dynamism of H2-20, motivated by the lifting of restrictions and the subsequent reopening of businesses, has decreased and recent dynamics became more erratic. Most early indicators have either moved down or remained stable in April, signaling some activity setback last month.

Regrettably, the economy will suffer a setback as Covid-19’s second wave hits our shores.

So far, the official response to the renewed outbreak had been softer and much more targeted compared to the nationwide lockdown imposed last year, as mobility data shows. However, the 9-day total lockdown announced yesterday will hurt an already weak activity, and there is no guarantee that it will not be extended if results are below official expectations.

We consider the economy will move towards the “second wave scenario”

We now expect activity to decrease -4.7% QoQ in Q2 and give way to a sequential recovery (+1.5% QoQ for Q3 and Q4). Quarterly dynamics are consistent with a 5% growth for the entire 2021, completely due to the statistical carry-over. By December, activity will be just about the same level as it was by the end-2020 and 2.8% below pre-pandemic levels.

Disinflation is nowhere to be seen, contrary to expectations.

Consumer prices have increased 17.5% so far in 2021 (average of 4.1% MoM), above the 16% (average of 3.8% MoM) forecasted by participants of the central bank's survey (REM). Even worse, our high-frequency price monitoring reports inflation is running at 3.9% MoM.

The nature of the inflationary process has changed.

Broader and tighter price controls translate into inflation spikes every 3-4 months (when prices of the controlled basket are updated). Furthermore, inflation has been less responsive to (official) FX movements and more to import dynamics.

In this regard, the second wave could provide some relief.

There seems to be a fiscal mystery going on.

When AFIP reported April’s tax collection, they stated in a footnote that receipts from the Extraordinary Wealth Tax (almost ARS 104bn) would be accounted as “non-tax income”. However, yesterday’s fiscal report does not include those resources (which have a specific use set by law) anywhere. In what follows, we assume that the money will show up in May’s fiscal report, adjusting our monthly forecasts accordingly.

With the economy moving towards our second wave scenario, we expect further fiscal deterioration.

Considering the official response to the pandemic outbreak, we forecast a primary deficit of 4.7% GDP (higher than our previous 4.5% GDP forecast). Some of the announced measures are new and involve higher social spending, while most of them were already incorporated in our previous forecast.

The financial program will be even more challenging, despite the government being able to roll over debt to 2022.

The Treasury was able to push debt to Feb-22 onwards, at the expense of concentrating debt on inflation and FX-linked assets. Assuming an optimistic net debt rollover rate of 150% (higher than recent performance) and that debt with IFIs is either rolled over, renegotiated, or paid using the extra SDR allocation, that would still leave a financing gap of 4.0% GDP, which would have to be covered by the BCRA. Most of the assistance would be required in H2 (3.2% GDP vs 0.8% of H1).

With commodity prices at record levels and very low depreciation expectations, it is no surprise that agro producers sold their harvest and exporters did not withhold foreign currency. In this regard, exports increased 21.8% YoY in so far 2021 (+16.3% YoY of prices vs +4.8% YoY of quantities), while imports increased 37.4% (3.1% vs 33.2% YoY). This scenario allowed the central bank to relax its grip on imports without compromising the trade balance (USD 4bn in so far 2021). We expect commodity prices to remain high, boosting exports, while lower activity would affect imports, with a trade balance that will total USD 14bn for the entire year.

The BCRA was even able to recompose its stock of reserves.

Central bank FX purchases totaled USD 5.2bn in so far 2021, though gross reserves increased only USD 1.9n. The difference can be explained by public sector operations (- USD 628mn), net payments to IFIs (- USD 1,2bn), reserve requirements (- USD 704mn) and “Other operations” (- USD 757mn), a concept that includes intervention in the CCL/MEP markets. As a result, the stock of net reserves increased USD 2.5bn and now stands at about USD 6.2bn, while net liquid reserves (those owned by the central bank and readily available for market intervention) turned positive and increased to USD 1.8bn.

The second wave scenario stresses monetary imbalances even more. We foresee three sources of money supply growth for the remainder of 2021:

The latter might be seen as “new”, as it was unexpected a while ago that the central bank could recompose its stock of reserves. But high commodity prices and now lower imports due to lower-than-expected growth made it possible.

The second source is now bigger, considering the higher deficit. And the last one will increase, as the central bank will have to sterilize more money to avoid widening monetary imbalances. All in all, we expect an additional money growth equivalent to 6.5% GDP, most of which will be covered by seignorage (3.7% GDP) or new Leliqs (2.7% GDP). This will increase BCRA's remunerated liabilities to 11.2% GDP, higher than the ratio registered prior to 2018's FX crisis. 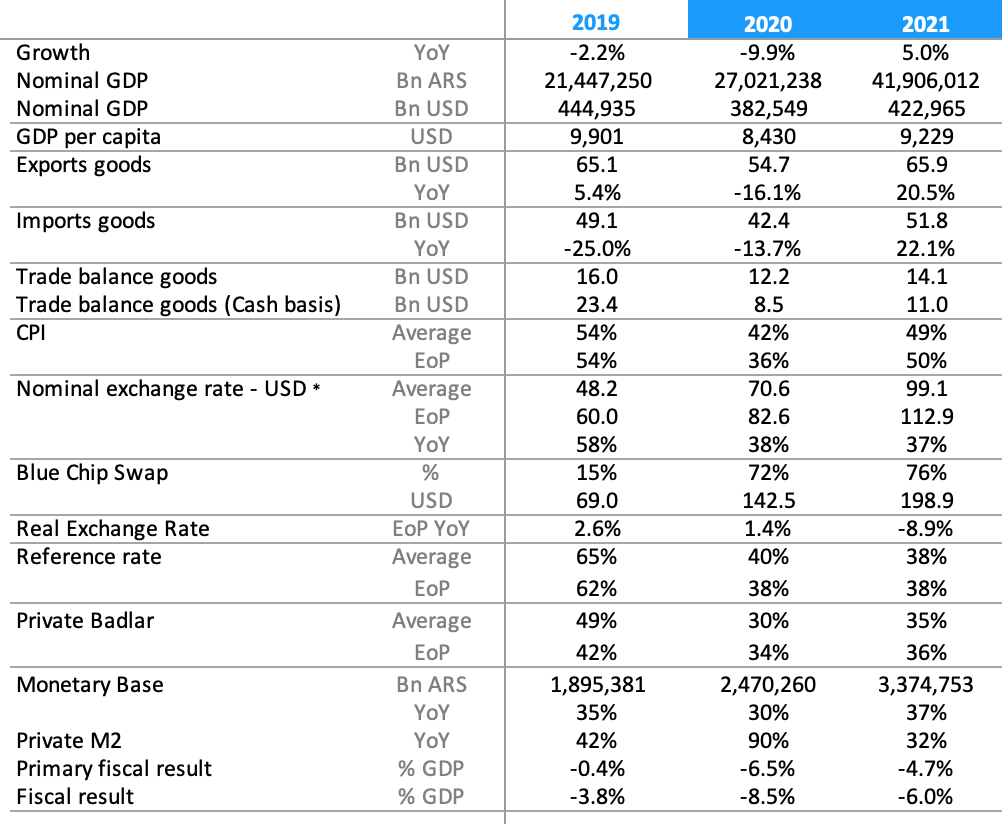